This building information modeling (BIM) company (the Company) develops powerful software that enables its customers to deliver safe, sustainable, quality designs and buildings while being highly productive doing so. The typical customer has about 10 licenses at about $20K each.

When the Company discovered its industry-leading software was being pirated and sold illegally, it began looking for solutions to stop the loss of revenue.

This chemical engineering simulation software developer (CESS) is a global leader in the development of specialized engineering simulation software for the design, trouble shooting, and optimization of processes for chemicals/petrochemicals, oil and gas, energy, materials processing, renewables, and research. Cylynt found pirated versions of its software on the web that had been downloaded a large number of times. Analysis suggested this was a multi-million-dollar problem, but the extent and cost of the piracy was at that stage unknown. The company partnered with Cylynt to discover the extent of its piracy problem and learned something surprising—that the piracy was not from commercial companies as assumed, but rather primarily from students exploring the capabilities of the software. 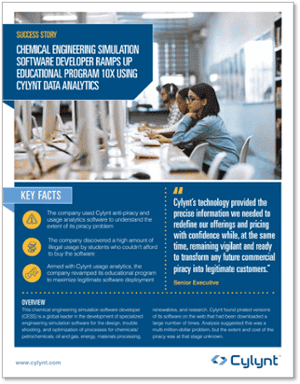 Nuhertz Technologies is a worldwide leader in low and high-frequency filter synthesis, simulation, analysis, and optimization software. Jeff Kahler, president and technical director, first realized he had an issue with piracy when an anti-piracy and software compliance company brought it to his attention during a demonstration. The Nuhertz/Cylynt engagement has resulted in a win/win for everyone. A previous inability to deal with a piracy problem from global giants became a success. The principal abuser of Nuhertz software is now one of its biggest customers. The company is now on top of its piracy problem, has recovered significant revenue, and has won a global new customer. The company continues to thrive and maintain its leadership in filter design software. License compliance is now an important part of the sales process.

This leading provider of EDA and semiconductor IP helps engineers design the transistors, standard cells, and IP blocks that  systems on chips (SoC). Its digital tools automate the design and verification of , gigahertz SoCs at the latest semiconductor processing nodes. Its IC packaging and printed circuit board (PCB) tools permit the design of complete boards and subsystems. When the company got serious with a formal compliance organization, it chose Cylynt.

This leading EDA software developer is focused on helping customers build great products that connect the world. When it discovered its software was being pirated, it began looking for solutions to stop the piracy. The company had suspected for a long time that its software was being pirated so four years ago a pilot program was started in which anti-piracy technology was integrated into one of the smaller software product lines. The technology validated the assumption that piracy was very pervasive in terms of the volume of software licenses being stolen. This pilot program also provided clear proof that other product lines were being pirated as well. 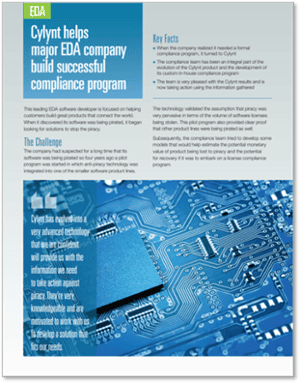 TransMagic develops easy-to-use, highly efficient and precise 3D multi-computer-aided engineering (CAD) interoperability software to enable seamless reuse of 3D engineering and manufacturing data in multiple software environments. In 2005 the CEO discovered a cracked version of TransMagic’s software selling on dozens of sites for $99. This issue had a major impact on TransMagic sales. By 2008 the pirates were cracking TransMagic software in less than a day despite the company having changed its licensing several times. The Cylynt solution is a win/win for TransMagic because it not only recovers lost revenue from pirated software, but also provides the company with new customers as an alternative to a punitive approach. 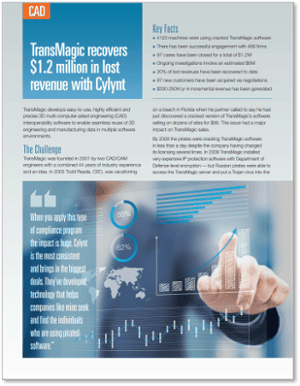 This architectural engineering company is transforming the way the world works by delivering products and services that connect the physical and digital worlds. Core technologies in positioning, modeling, connectivity and data analytics enable customers to improve productivity, quality, safety and sustainability. When the company’s director discovered its software was being pirated, he began looking for solutions to stop the piracy. Cylynt has complemented and upgraded the company's anti-piracy program immensely. The financial recovery is growing, which the director appreciates since piracy is also growing. Another positive impact is that legal customers are very happy that the company is pursuing the pirates who are robbing the industry and creating an unfair competitive advantage.

Discover How Piracy Is Impacting Your Company, Your Customers, and Your Profits with a Complimentary Piracy Impact Analysis