Previous Next
Posted By Ted Miracco on September 09, 2019 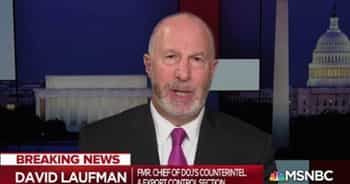 David Laufman, partner at Wiggin and Dana law firm and former chief of the Counterintelligence and Export Control Section of the National Security Division at the Department of Justice (DOJ),  will be a keynote speaker at the upcoming Cylynt Software Piracy and License Compliance Summit and will discuss “Keeping Secrets:  Confronting the Threat of Economic Espionage.”

A recent article by Masood Farivar for VOA News, “US Cracks Down on Chinese Economic Espionage,” relies heavily on quotes from  speech by Laufman in a discussion of how the U.S. DOJ is escalating prosecution of Chinese economic espionage cases as part of an administration crackdown on the country’s theft of American intellectual property. Laufman says in his speech, "The indictments and prosecutions that you're seeing the public face of now are consistent with and a natural follow-up to the highest public priority now assigned by the Justice Department to countering Chinese-sponsored economic espionage."

The article says the increase in prosecutions is part of a "China Initiative" launched last year to address the ongoing Chinese theft of American IP that has cost American companies in excess of $18 billion.  "The purpose of (the initiative) was to underscore the strategic priority of countering Chinese national security threat across a spectrum of behavior," Laufman says.

Laufman is a member of Wiggin and Dana’s White Collar Defense, Investigations and Corporate Compliance Practice Group, a member of the International Trade Compliance Practice Group, and co-chair of the National Security Practice Group. He has extensive experience in government enforcement and national security affairs and oversaw the investigation and prosecution of offenses concerning the theft of trade secrets and other proprietary intellectual property benefiting a foreign government or instrumentality (economic espionage), cyber intrusions by nation states and their proxies, U.S. export control and economic sanctions, foreign agent registration and disclosure, atomic energy and counterproliferation, and espionage, and the unauthorized retention and disclosure of classified information.

Join us at the Cylynt Software Piracy and License Compliance Summit to learn more about how to protect your company from piracy from David Laufman and a host of business leaders and cybersecurity and legal experts.